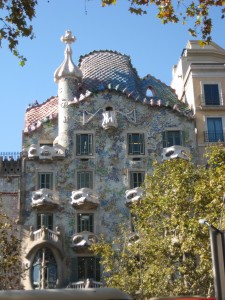 The work of architect, artist, and designer extraordinaire Antoni Gaudí is the single draw that put Barcelona on the top of my “must visit” cities.  I was not disappointed! Although there is much to see and do, his work held my fascination as we moved throughout the city. I call him “artist” because his mastery of all the materials, elements, and mediums he chose to work in was and is creativity on steroids.

Most of Gaudí’s work is distinguished by his passions in life: architecture, nature, and religion. His fourth love was his home land of Catalonia. I read, when in Barcelona or the region, you’re in Catalonia, not Spain.  Gaudí was in great company in his immense pride of place and heritage as many notable figures are also natives of this region.

His iconic project, Casa Batllo, is called by locals “House of Bones. ” Skeletal like forms interpreted in objects such as handrails, carpentry, windows, doors, and the sculpted walls themselves characterize the structure. The design contains many references to nature in both the interior and exterior, with clever integration of natural light and ventilation. It is admired for organic and curving lines, the exterior with dripping mosaic tile details, and an interior with practically no straight walls. A pure joy to visit! 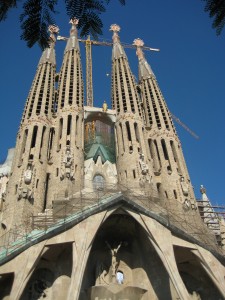 Although not as widely know as other works, Gaudí’s magnum opus* (must admit I hadn’t know this term until now) is the unbelievable cathedral Sagrada Família. Translated Basilica and Expiatory Church of the Holy Family, it is the one of most memorable European sites I’ve seen to date.

A contemporary yet classic structure of contrasts and beauty, it is reverent, sculptural, and playful all at the same time. Construction began on the controversial and immense building in 1883, and due to many factors continues today. The expected completion is 2026—the centennial of Gaudí’s death. 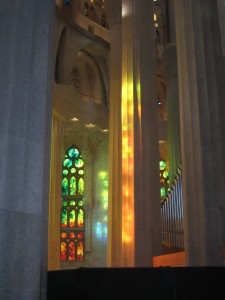 The Sagrada Família interior is a wonderful display of light, shadow, artfully manipulated reflections of colorful stained glass, and strong architectural forms. As the interior columns reach for heaven, their “branches” seem almost tree-like. Tiny skylights allow light to filter in from above as to mimic a forest canopy and lift common awareness toward God. It’s sculptural and interpretative exterior is vastly different one side to the next, and is rich with masterfully executed stories and symbolism. Many local craftsmen end their careers by working voluntarily on the still evolving masterpiece. 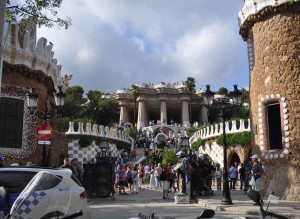 It’s near impossible for me to identify my favorite Gaudí project. That said, Park Guell captured my imagination in ways unlike the other sites. The complex exemplifies his genius, integrating structure, playfulness,  and landscape. Always ahead of his time, this site was designed as a thirty acre park, garden, and gated community, with structures oozing out of the surrounding earth. The landscape design and plantings are living creativity and spoke to the uniqueness and the climate and region. Truly a site built for people  to live in and enjoy, as they do to this day.

I could go on about Gaudí’s unique life and works. He said, “Nothing is invented; it’s written in nature.” Best to go and see for yourself. Catalonia is a wonderful place to visit! 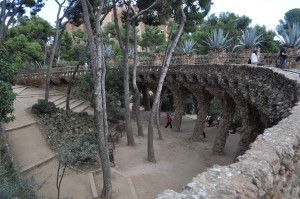 
The Artistic Genius of Picasso »

For me, part of the fun of any significant vacation is the deciding, planning, booking, and anticipation of the big event. ...