Merry Christmas to all, and to all… 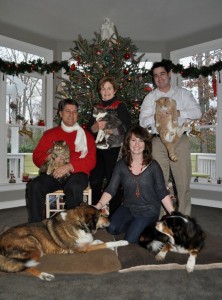 Last Christmas was, without a doubt, the single most magical I can remember. The four of us flew down to Atlanta Christmas Eve and back on Christmas day. Yep, that’s right, we stayed for just under 24 hours. Immediately on return we were to drive to visit other family and friends in rural Eastern North Carolina.  Before leaving ATL, ♫ oh the weather outside was frightful ♪… it had begun to snow- even in hotLana. The forecast was ominous! Yeah!!

To my delight, the snow was coming down steadily upon our arrival back in Virginia. As night fell and we made our way on rural two lane roads, those big, beautiful snowflakes danced in the headlights. The effect of night driving in snow can be quite hypnotizing. The travel was at times a bit scary, as the road occasionally would all but disappear. The white  line on the right side of the road blended in with the snow and camouflaged the edge of the pavement. Wonder if it’s white in areas that get a lot of snow each year. If so- not good, but I digress.

We arrived safely, and “soon were nestled all snug in our beds and had just settled down for a long winter’s nap.” Next morning, we awoke to well over a foot of snow. For Eastern NC that was a bit of a fluke, but absolutely beautiful! The magical day after Christmas was the most perfect “Norman Rockwell” holiday I’ve ever experienced. There was nothing to do but enjoy! We truly spent time with each other, shared stories, played in the snow, ate well thanks to chef Martie, and relished in the present moment! We lost power for long enough to enjoy it, but not so long as to get really cold, or start to panic that with a well- no power, no flush! During the outage, we read a small antique book to each other that our daughter Diane had given to her dad, the Mr. Santa Claus incarnate. The story was The First Christmas Tree, and was written in the early 1900’s. As we finished the book, the power came back on!

Definately a holiday for re-living and re-telling in Christmases future! My niece Carrie created this utube video of our time together. The video speaks for itself as it tells the story of the magical Christmas that was!

ENJOY, Merry Christmas, and happy holidays to you!

So I've just learned that Richmond made the CBS Sunday Morning show (December 18) with a national story about our infamous...