In Our Little Slice of Heaven! I describe our the home, surroundings, and environment. It is our personal haven and sanctuary, and is also home to much wildlife and many bird  families and species. This spring has been especially fun as we have been really entertained by the bird life around us. 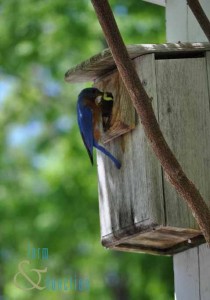 For many years a blue bird house has been at home on a post that supports our wisteria covered arbor. It was originally mounted with great care for blue bird preferences- south facing, five feet above the floor, the entry hole of  the the perfect 1 1/2″ diameter… you get the picture! It has been the address of many bird families and their babies, just not blue birds. Year after year other birds did prevent blue birds from inhabiting the home we created for them. Not this spring!

Despite their skittishness, blue birds did indeed build a nest in the house on our deck. Right there, amongst the people, dogs, cats, and numerous other critters that mingle there. We watched as the gorgeous blue birds busily prepared their nest inside the perfect house. 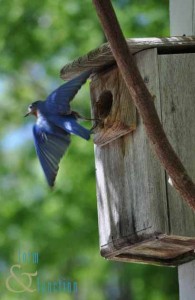 We didn’t pay much attention until the obvious day came. The eggs had hatched and the hectivity began. In central VA, this year we had a particular over population of little green inch worms. The poor little worms proved to be abundant food for the birds and their babies. I sat a few times very quietly with my tripod mounted camera and telephoto lens ready to capture any images possible. Mr. & Mrs. blue bird were pretty brave and cooperative photography subjects.

I could have opened the bird house and peaked in, but I dared not for fear that the parents might get spooked and not return. Then what would I do? So we left them alone with hopes and prayers that all would be safe and go well until the babies graduated to flight!

Over the next couple of weeks the activity level was very high, I hoped to get some shots of the fledgling babies when the time came. As it happened, I was not to be home when the babies made their move. That part of the story has to be conceived of in your minds eye. Do picture this, baby birds don’t just fly away from the nest. I’ve had the blessing to watch this a few times. They sputter and flutter several times before finding flight with their newly developed wings. We took extra care during those last few days to keep cats and dogs inside so that the babies had the best chance possible to make their getaway.

We didn’t get to see the blue birds make their exit, but that was not so with the cardinal nest that followed next.

Our Little Slice of Heaven!

Our home in the burbs of Richmond, Virginia, sits in a beautiful and natural setting. We're lucky that when the development...